The following notes make no claim to be the definitive account of the complex undertaking that was “Exhibiting Space”. Please regard them as a ‘public draft’, subject to revision, change and maybe, one day, some kind of consolidation.

Since its ends in 1989, reliable information about “Exhibiting Space” in the public domain has not been readily accessible. This has led the odd specialist researcher to engage in ill-informed speculation as to its place within the tradition of systematic constructive art practice. The history of latter is itself often overlooked as an object of research. This has not made the evaluation of whatever place “ES” might be considered to occupy within this history any easier.

The tendency has been for speculation to usurp the place of concrete research. Scholarship on “Exhibiting Space” has been consistently poor, failing to meet minimum academic standards.

By inaugurating the process of bringing accurate information on “ES” into the realm of public discourse, it is hoped that these notes will assist any future researchers in constructing a more accurate picture. 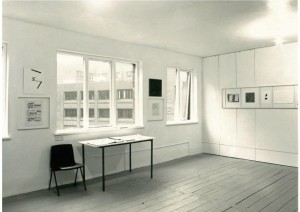 Exhibition 2 Drawing: 44 works on or in various media

“Exhibiting Space” was a radical artistic, political and social intervention dedicated to ‘raising the public profile of systematic constructive art practice’. A self-learning project, “ES” was initiated, managed and financed mainly by artists.

The primary focus of its activities was the collective-collaborative elaboration and delivery of a ‘composite text’ comprising: exhibitions, lectures, talks, round-table discussions on theoretical and political questions for contemporary practice, writing and publishing, recitals of classical and contemporary music . . .

In addition to reaching across disciplinary boundaries, e.g. visual/verbal, drawn for artists by the culture in power, “Exhibiting Space” fostered collaborative, de-centred, non-hierarchical forms of social organisation and working practices.

In session, meetings were held on the first Saturday of each month. Most meetings included strategic and management components. Both ‘moments’ were open to the public. This ensured that decision-making processes were transparent, with outcomes subject to democratic accountability. The presence of visual-plastic artefacts for reading and comment was an essential feature in these gatherings. Impromptu readings could often be as productive as set piece analyses.

A commitment to public reasoning, openness and accountability was considered essential to countering ‘closed shop’ exclusivist groupthink tendencies that had caused the failure of previous attempts at collaborative working practices.

“ES” was in part a response to past failures to resist such tendencies. It would strive therefore, in both language and deed, not to reproduce the closed intellectual-social orders that had repeatedly failed.

The habitual use of terms such as ‘founder’, ‘group’, ‘member’ etc., plays only to the divisive logic of binary oppositions. The reality shaped by the careless use of such terms was often one in which subjects were positioned as either privileged Insiders or rank outsiders. Breaking down the logic of binary opposition was hardly going to be aided by uncritical retreat into a reality shaped by its divisive language.

The primary aim of “ES” was not group unification, achieved through the constitution of excluded others. Participation was not restricted to subjects prepared to sign up to some foundational creed. Opening “ES” to all prepared to graft necessitated the positive avoidance of the excluding language of subject-group identification centred on Insider/outsider terms such as ‘founder’, ‘group’, ‘member’.

During its pre-public phase, the negotiation of what turned out to be a rather steep learning curve was undertaken by upwards of thirty colleagues, comrades and friends. All gave freely of their creative energies and skillsets to enable “ES” to become a reality.

Significantly, vanishingly few of the many who freely aided and abetted the making of “ES” came from within the practice to which it was dedicated.

Having facilitated the opening of “ES”, its co-initiators relinquished any claim to – or identification with – a ‘founding’ role in its constitution and assumed the role of cultural co-workers.

Shortly after its public debut, the artist Christine Hatt became a regular and indispensible participant.

The regular and indispensible participation of artists Jean Spencer and Malcolm Hughes followed that of Christine. They were frequently accompanied by the artist Keith Richardson-Jones. When “ES” was in session, he made the 260 mile round trip from his home in Wales to London each month.

Within the firmament of SCAP’s established ‘names’, these three were exceptional in extending “ES” continuous, near-unconditional support. This lasted from early 1985 until 1989, when the loss of its regular London venue forced the ends of its public phase.

Many of the questions for contemporary practice articulated and tabled in the context of “ES” remain open to this day.

To be continued . . . please check back